“I’m in love with you,” he said quietly.

I’m reaching a saturation point with being on crutches. It’s all anyone talks to me about these days. It used to be strangers would come up and start talking to me about my height. Being tall was the first and only thing that they noticed about me as far as I could tell. Some people get told their beautiful or have nice hair or a klutz. ‘You’re really tall,’ is what people typically say to me.

Someone suggested coming up with a more creative story. ‘I was running from the PoPo…’ but that’s as far as I got.

There’s so much more to me than my broken foot, or my height. I know there are huge lessons and beautiful moments to be gained from the broken foot. I also love my height. It gives me the best view at concerts, specifically the mosh pit in front of the stage for Pearl Jam in Brooklyn at the Barclays Center, but I long for interactions, intimate and meaningful interactions with people that look beyond these two very blatantly obvious things about me. Especially now.

Conversations that focus on adventure, food, cupcakes, siblings, love, dogs. Anything but the obvious. Anything that helps me forget the crutches and the time it takes for me to get from here to there and the fact that mornings and night times are usually the most difficult because I’m not sleeping well and the chores associated with starting and then finishing the day are seeming endless. I’d prefer to think about new possibilities, hopeful moments, connections. But the consistent exchanges about my broken foot are empty, predictable and shallow. They lead nowhere – mostly because there’s nothing left for me to say about it. The moments during the day that I’m not reminded of the current broken foot scenario are few. I’m feeling trapped and at moments want to scream, there’s more to me than this. I’ve reached the end of my rope-of-tolerance. I have visions of cutting off the cast. But I don’t. I succumb and answer and then put my head down and crutch away.

‘I was running, jogging actually, and stepped funny.’

And then the conversation is over as far as I’m concerned.

I feel like the cover of my Netflix envelope. Except her vacuum probably works. Wonder what it would take to get that bitch over here to vacuum my place. I’d probably get her voice mail. 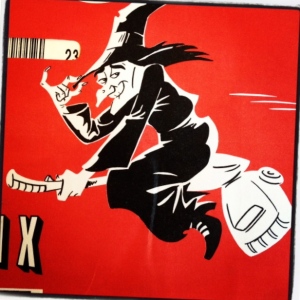 A poignant sense of isolation is circling the drain. I get home and I close the door and I crutch up the stairs. I drop my backpack and feed the dog and fall into the couch. Oh the relief in being able to put my foot up again. But then as I relax into my well worn spot I look around my apartment and absorb the quiet and feel, isolated. Lonely. The only relief from the loneliness is logging onto FB. Perhaps someone tagged me in a post. Someone thought of me. This makes me feel good for a moment. But it’s a flash of time and then it’s over and it is just me and the dog and more silence.

On a good note I made it to the hairdresser today. An appt. scheduled long ago. Make sure you’re buttoned up for interviews, I thought.

‘Oh no, what’d you do?’ asked the receptionist and the lady who got me coffee and my stylist and the girl who washed my hair.

You already have an idea how I responded.

I understand everyone is doing their best and most folks don’t know what to say. Myself included. I also went to a wake yesterday for the 93 year old father of a friend. He simply passed away from old age. As I hobbled down the line and offered my sympathies to each member of the family, most of whom I did not know other than my friend – as I reached the last grandchild in line and introduced myself, the boy smiled and just looked at me and nodded, and so, feeling awkward and somehow suddenly not knowing what to say, I said…

To the grandson. At his grandfather’s wake. Thanks for coming.

Speaking of being on crutches, I just wish that one person, that one dark knight, that one caring soul would come along and reach out and say something to me that pokes at my soul and wakes it up a bit and reminds me I’m still a girl, a person.

What could they say to me? I don’t know. I’ll let you know when it finds me.

View all posts by M.